Magnetic beads, or paramagnetic beads, are polymer beads containing iron oxide that exhibit magnetic behavior only when in the presence of an external magnetic field. By the use of magnetic beads with the surface coated with affinity ligands, they can be used for protein purification. Typical affinity purification is performed by a capture step, wash steps and an elution step. A magnet is used to separate the magnetic beads from the supernatant during the various steps. The protocol can be automated by a liquid handling system and a magnet plate or magnet rods.

A pipeline was developed by the Oxford Protein Production Facility (OPPF) that included protein construct design, expression screening, and sample preparation. Expression screening evaluates how various constructs are expressed in different hosts in a small scale before scaling up the protein expression batches. The recombinant proteins were expressed with a His-tag for purification in E.coli. Here, 1 mL cell cultures in a 96 well plate format were used for protein purification by centrifugation, lysis and capture by Ni-NTA magnetic beads.

Another chapter describes the purification and characterization of proteins expressed from multiple expression cultures from E.coli to identify the most promising expression construct and expression conditions before scaling up cell culture volumes. Here, proteins were purified by the use of PhyTip columns, which are a packed chromatography column in a pipette tip for the 96-channel pipetting head of any liquid handling system – in this case a Hamilton Microlab® STAR and Beckman Biomek FXΡ. For protein capture, the pipette pump processes the sample up and down the pipette tip and across the resin bed column several times until the entire protein sample has been captured on the very small column volume (in this case 5 µL or 20 µL). What makes this platform unique is that PhyTip columns packed with various affinity medias were mixed on the same 96 tip rack – so that proteins with different tags could be purified at the same time in the same 96 well plate. This platform is described in further detail in this blog post. Gravity columns are typically used for manual mid-scale protein purification. However, a customized system is described here where protein purification by gravity columns was automated. In this platform, proteins were produced by either transient transfection in HEK cells or stable transfection of CHO cells. A custom robotic platform was used for production of IgG Fab fragments and non-antibody proteins for drug discovery programs. A Tecan Freedom EVO® platform was used for protein purification from cell supernatant by gravity-fed affinity chromatography for purification of up to 96 supernatants at once. Ni-NTA Agarose or MabSelect™ SuRe™ resin was packed into poly-prep chromatography columns to a bed volume of 200 µL resin per column. A unique adapter was used to place the gravity columns on the deck of the Tecan system. The columns were loaded with sample, wash buffer and elution buffer using the LiHa pipettes. Each sample was eluted with 950 µL elution buffer into 24-well plates. Another chapter describes bacterial production of oxidized disulphide -rich proteins and peptides from animal venoms. Ni Sepharose 6 Fast Flow resin (GE Healthcare) resin was used for purification of His-tagged protein on a Tecan Freedom EVO® liquid handling robot. Lysed E.coli cell cultures were mixed with resin in a 24-deep well plate. A 96 channel pipette head was used to mix the content of each plate. The cell lysate mixtures were then transferred to a filter plate and vacuum was applied to transfer the resin with bound protein to the filter. The filter plate was washed with a binding buffer and then with a wash buffer. An elution buffer was added to each well and vacuum was finally applied to elute the purified protein.

Implementing an effective protein purification process is essential in a streamlined protein production workflow. Luckily, there are a number of automated solutions available today. Make sure the solution you pick for your laboratory meets your needs in terms of flexibility, productivity, ease of use and protein recovery. 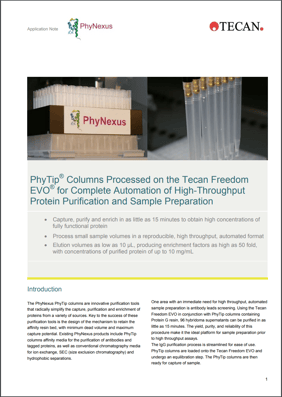